Possibilities and Limitations of Virtual Convening

As with all convening, virtual environments come with their own possibilities and limitations.

The video below summarises some of the considerations that we’ve taken into account.

Avary: Hello everyone and welcome to lesson seven of Chapter One: Learning about the Limits and Possibilities of Virtual Convening. I'm Avary Kent, the Co-founder and Chief Innovation Officer of Conveners.org

Michael: And I'm Michael Kass, the founder of Story and Spirit.

Avary: So as we make the transition to virtual convening one of the things that we look at is that there are actually some new possibilities that do get unlocked. Some of those are around participant agency, having things like back channeling in your chat window or breakout groups. Or the ability to just whisk everybody back together when your breakout group is done on zoom, versus wrangling everyone in real life can actually be pretty fantastic compared to doing a convening in person. But of course there are also numerous limitations as well as we make this transition to virtual computing.

Michael: One of the things that often comes up, and has come up quite a bit in other cohorts as we've evolved this workshop, is the idea of inclusion and equity when it comes to the limitations of virtual convening. In the same way that some people can't take an aeroplane to get to conferences, some folks simply don't have the bandwidth necessary to support video chat in any kind of stable way. And so that's one thing to definitely take into account in addition to all the possibilities that open up in the virtual space.

Avary: Absolutely. Some of the other considerations as you go back to your convening purpose is understanding that it is very different to facilitate online. And so understanding who you need to engage to make your convening really high-impact is an important part of really mapping out those facilitator requirements and their influence.

You need someone who is very comfortable with projecting a lot of energy and enthusiasm. It actually takes a lot more out of you in a virtual environment than it does when you're in-person to have that captivating or engaging piece. Similarly you want facilitators who can really model how you want your participants to show up. So if you are creating a container where people are being vulnerable or brave, you need a facilitator who's gonna be comfortable going there and holding space for that.

Michael: Absolutely. And then you know when it comes to this idea of serendipity and hallway moments. Avary I know you and I met during one of these serendipitous things. During a keynote we just happened to be sitting next to each other. And so one of the possible limitations to think about is you know, in an online space, although you can whisk people back and forth from breakout rooms to different events, it also can reduce the possibility of people running into each other and having those hallway moments.

Avary: There are exciting new software platforms that are coming online that are specifically trying to capture this. I'm sure at this point all of us have participated in the horrible thing that is a zoom happy hour. I would not wish that on anyone. Because the truth is, when you think about why you're doing an engagement like a happy hour as part of your event, it's because this creates a container where lots of people can catch up with friends and meet some random new people who are talking to somebody they know. When it's all forced into one large room or even forced smaller breakout rooms or groups on zoom, that really defeats the purpose of why you're bringing people together.

So there's a new platform called Gather - it used to be called Online Town - that is creating this place where you can have that participant agency. You can quote unquote "wander around the hallways" and as you get close to somebody you can just jump in and engage them in conversation. Icebreaker is another one that's for more of a structured. networking. But thinking very critically and thinking about how those hallway moments kind of need to be designed as separate sessions can be really game changing when you're thinking about bringing your community together.

Michael: And then moving on to this idea of engagement and multitasking. One of the things that a lot of people bring into their kind of assumptions about virtual events is that they will be able to do other things while they are engaged with the virtual event right. And so there's, a friend of mine actually, sent me a picture recently. He took a screenshot of people on a meeting, a group meeting while they were at work and they were all clearly doing something else while they were in this meeting.

And so Avary I'm so curious how would you suggest increasing the likelihood that folks will stay engaged with the event?

Avary: Well don't lecture at them for one. So yeah it is very hard to multitask when you are in a small group conversation. When you are being asked to reflect. When you are really being drawn into the topic for consideration. And so thinking critically about when you have people all on the line together and how you can leverage that time together.

Another thing is giving variety. You know, providing music, providing performance time, incorporating humour and other things that just get people disconnected from their other work and reconnected or engaged into your what you're offering

Michael: Yeah. And to build on that, the idea of creating kind of a contoured or shaped experience where there's different types of activity, so they're not just consuming. Maybe there's time for individual reflection. Maybe they're given a mission to go out into their immediate surroundings and find something and bring it back - kind of like show and tell but for grown-ups, unless you're working with children. Right? What are the small group opportunities so that they never get lulled into that sense of kind of, it's almost a quasi-hypnotic state where you're just getting content beamed into your brain?

Avary: And let's not forget it's not like at your in-person event people weren't also sitting on their phones and laptops during plenary sessions or panel sessions. So this is not novel or unique to virtual convening. This is something that we've always had to grapple with as conveners when thinking about the information sharing portion of our agenda.

Michael: But you know what is unique to the virtual environment? Tech learning curves.

Michael: The idea, especially if you're working with folks who might be a little bit older or just don't have the same access to uh to tech tools is, depending on the platform that you're using, there may be a bit of a learning curve for people to feel comfortable in that environment. And so something we always think about is how are we taking that into consideration and building that learning curve into the design of the convening?

Avary: And similarly, tool flexibility. Right now there is no one tool that rules them all. We have had some success with a platform called Hopin which really does recreate that virtual convening venue type container. Where you have your main stage, you have your networking sessions, you've got sessions both created by the convener as well as sessions that can be created by participants directly. You have expo booths and sponsor halls. That is the most comprehensive we've seen. It doesn't do the hallway moments very well. It doesn't do the kind of back channel chatting between participants very effectively and it can be quite expensive.

So, really thinking about a variety of tools that you can use to serve your needs and also making sure that there are options. For example, dialling in. That is one of the considerations when you do want to be inclusive is making sure that there are ways that people can just call in by phone. Not everybody's gonna have access to a laptop, not everybody's gonna have access to video, and so giving space for people to dial in can be really helpful.

Michael: I think that that brings us to this idea of bandwidth right? There are some platforms coming online now that are really cool and allow you to build virtual environments. And if people have VR headsets they can go and use them. And also those eat up tons and tons of bandwidth which immediately limits the possibilities for engagement for those who don't have access to that level of bandwidth. So, just because something exists and is cool doesn't mean that it's the right fit for your convening.

Avary: Which is why we grounded this entire lesson first in your purpose statement. Being really clear on your purpose and why you're bringing people together can help you when you're making those decisions about which tools to invest in or not.

I think one of the opportunities that's created by virtual convening is a reduction of the environmental impacts of convening. Especially if you used to run a global, you know, international event. There's a pretty significant carbon footprint associated with people flying in from all over the world. You know, providing food and catering and tchotchkes for everyone. There's definitely a reduced environmental impact for virtual convening.

And this is one of the ways where there is also actually an inclusion opportunity with virtual convening. Because, now that you're not requiring people to fly or travel or take multiple days off of work in order to participate,
this can open the door for even more people to engage.

Michael: Absolutely. And one of the things that I know a couple of groups have done is taken some of the budget that they had dedicated to travel and they're using it to send hardware and connectivity tools to folks who might not have that same internet bandwidth access so that they can participate.

Avary: And I think that also brings us to many conveners offered some form of fellowship or scholarship to make sure that nonprofit leaders or social entrepreneurs or others whose voices really needed to be at the table were able to be included. And it's important that we don't give up that framework of removing those barriers when there are voices that need to be in the room.

And as Michael shared, like being able to send hardware, for example, is one way to do that, and leverage that what would have been your fellowship budget.

Well thank you so much for joining us. This is the end of our video on limits and possibilities.

As you consider your own virtual convening ask yourself:

1. Where are the possibilities to achieve our objectives more effectively?

2. What limitations will we need to accommodate a virtual convening environment? 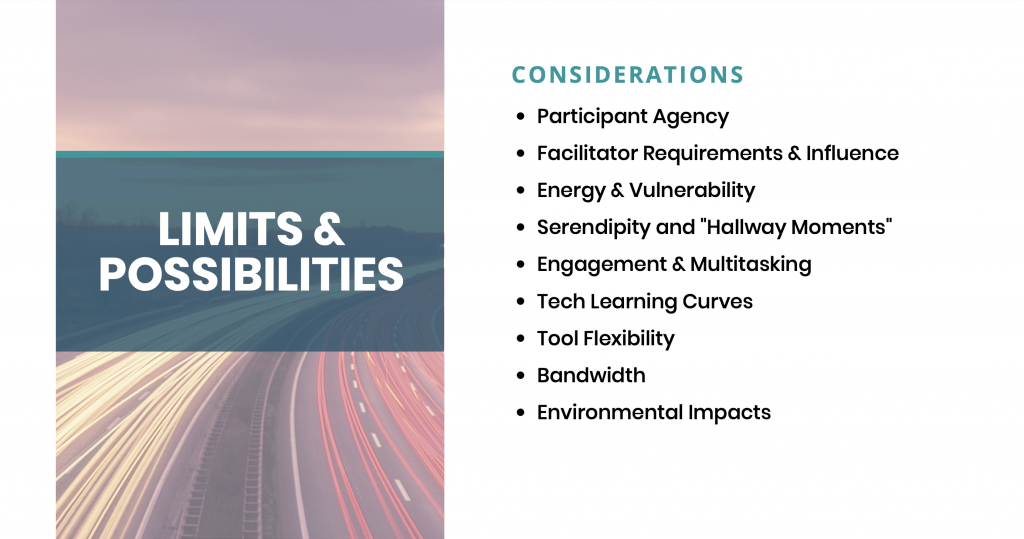 Unlocking the Power of Virtual Facilitation

Learn the foundations of virtual facilitation to achieve your convening goals